Hello, my name is Myles I am 11 years old and I want to talk to you about space.  I like Space but it is such a big concept and it would impossible to tell you everything in one blog. So I am going to talk about the planets. 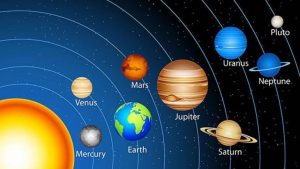 The Sun is not really a planet it’s actually a massive star that will go super nova in about 3 billion years from now. I would not like to live on this place as it would be a little too warm.

Mercury is the closest planet to the Sun. Did you know that a year on Mercury is only 88 days long? Mercury has a molten core. I like Mercury but I would also become roast meat.

The average temperature on Venus is 462 degrees. Venus is so bright. Venus is known as the morning star. Venus is also really cool planet in my opinion, but I still want to stay on Earth.

Earth home planet. The only planet with animals and water, well as far as we know. We will have to move to another planet as we have ruined this planet, but I think I’ll stay on Earth until I have to leave.

Mars and Earth are the closet planets, as it is most alike. So we could technically move there after Earth dies. It is also my favourite planet. It just looks so cool, in my opinion.

Jupiter is a gas giant. There is also a Giant hurricane the same size as Pluto on the surface and that is what the massive spot is. This planet is vast and a little too big for me, I      wouldn’t mind a bit more room but Jupiter is over doing it.

Saturn is the second biggest planet but it is still quite small compared to Jupitar, it looks like a pretty cool planet with a really cool asteroid belt. It is also gas giant. I like how it looks because it’s blue which is my favourite colour.

A year is very long on Uranus. One year on Uranus would be 84 years on Earth as the Earth has a super quick orbit as it is so close to the Sun. So I would still be 0 years old. I don’t like that prospect. I don’t want to be a baby again.

Neptune is also a gas giant but it is the smallest of the three. Neptune has six very faint rings. I like how there are rings around the planet because it makes it look science fiction.

8 Replies to “SPACE by Myles”