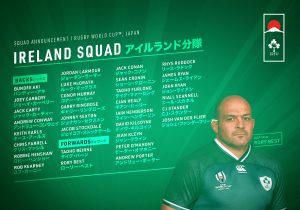 I know that Devin Toner did not make the final cut and the same with Kieran Marmion and Jordi murphy but this our opinion on the squad.

Ireland RWC predictions: In our opinion Ireland will make it out of their group easily and then unless New Zealand have a big upset and don’t finish first in their group we will play RSA in quarter final and barely scrape through but then in the semi- final the pressure will get to the young squad of Joe Schmidt and Ireland will exit the RWC in the semi-final.

Ireland’s first warm up game was against Italy, we played well but we could have played better. The score was 26 -16 to Ireland. Ireland’s second game was versus England, we played atrocious against England. The score was 57-15 to England. Ireland’s third warm up was against Wales. Ireland won 22-17. And finally Ireland’s fourth warm up was again against Wales again coming out victorious winning 19-10 to Ireland, Ireland came out victorious against Scotland winning 27-3.

Let’s now hope for a miracle in Japan.

That’s our blog we hope you enjoyed.