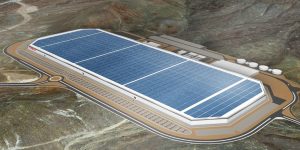 The CEO of Tesla Elon Musk has devolved the biggest solar battery to power Australia.  His promise was that he would develop it in 100 days or it is free!

Against a backdrop of almost 100 wind turbines 150 miles (241 kilometers) north of Adelaide, the Tesla Inc. chief executive officer announced a contract for the project had been signed with South Australia’s power distributor, triggering a 100-day self-imposed deadline to install the electricity storage system. He also revealed about half the promised capacity of 100 megawatts was already in place on site, meaning Musk should easily beat a deadline to have the unit in place before the power grid comes under the summer strain in December. He completed it within 100 days.

One Reply to “Elon Musk’s Solar Battery By Lochlan”