If you want to understand Trump and know how he became president, it is good to look at back before he became the President of the U.S.

Donald J. Trump was born in 1946. His dad Fred Trump was a real estate developer in New York. Trump being born into a rich family he was spoiled. He was sent to a military school and was one of his best students in the school. 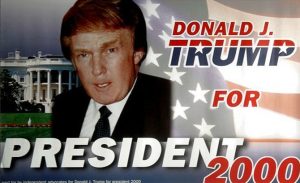 Eventually he grew up and was a man. He took control of the Trump Company and started doing big changes.  He made the Trump brand completely centred on him, made products like Trump Steaks, Trump Vodka, Trump Perfume, and Trump Clothing, and even Trump the board game. This business strategy worked really well! He then made golf resorts, hotels and a reality TV show. This has made the Trump Company the 48th richest company.

Then in the year 2000, Donald J. Trump ran for the President of the United States of America, and was made fun of by the media. He obviously lost and he was considered a joke candidate. Seeking for revenge Trump ran again for president in 2016, but this time it was no joke.

His speech for running for the President of the U.S. started with that he will build a wall among along the Mexican border and the Mexicans will pay 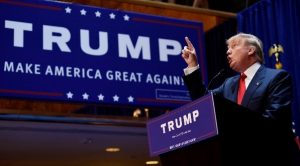 for that wall, and the people loved it. He said that Obamacare was to be abolished, but many people who were voting for Trump were covered by Obamacare. They still voted because they thought he would not actually abolish it. The promises kept coming and coming.

When he won the Republican primaries people were getting a little worried that he could actually become president. Then the debates came along and each time he got destroyed by Hillary Clinton, and each time the polls went up for Clinton. Trump said that this election was rigged and was ranting about fake news. 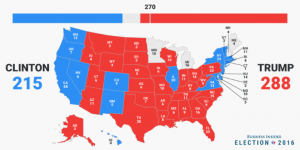 Then Election Day rolled in. Clinton supporters waited to celebrate, but then the results came in. Trump had 288 Electoral Votes while Clinton had only 215.

Trump went into office with a big smile and immediately faced issues like North Korea, making a new health care system and the problem of Jerusalem being the capital of Israel. This is a huge issue for the U.S. The U.S. is the world’s biggest economy and biggest military power in the world, and all this is in the hands of Donald Trump. It is scary.