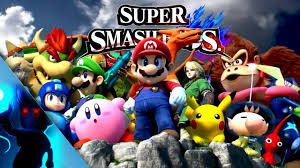 Super Smash Bros. is a fighting game series made by Nintendo it includes Nintendo Characters fighting each other with cartoony violence. The first game in the series is Smash Bros. 64 which came out for the Nintendo 64 in 1999.   It was originally only a Japan exclusive but it later came out in the Americas and Europe after it sold very well in Asia. There are eight playable characters from the start including Mario, Pikachu and Link. There were also four more unlockable characters (Luigi, Captain Falcon, Jigglypuff and Ness).  It was praised for its easy to learn but hard to master controls. The next game to come out was Smash Bros. Melee which came out for the Gamecube. It is a huge upgrade from the Nintendo 64 version including THIRTEEN more playable characters as well as the original 12. There were eighteen stages from the start and eleven more unlockable stages.  It is regarded to be the best Super Smash Bros. game and is still being played in tournaments. The next game was Brawl which is disliked by Melee players for being a very casual game. The thing I like about Brawl was the subspace emissary which is essentially a Smash Bros story mode with fully animated cutscenes and gameplay but that can get tedious at times. The latest game in the series is Super Smash Bros. for 3DS and Wii U which came out in November 2014.  I like it a lot because there are over 52 characters in the game and a great design.

Super Smash Bros is one of my favourite game series of all time. It is extremely fun to play with addictive gameplay and you can play with friends. There are battles with Nintendo characters you would only wish of to come to life.