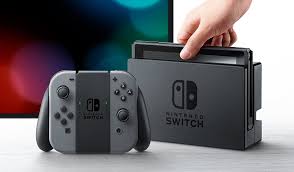 The Nintendo switch is the seventh home console released by Nintendo.  It is a both a home console AND a portable console. It was announced on October 20th, 2016 and was released on March 3rd, 2017

The launch titles for the switch included the legend of Zelda: Breath of the Wild and 1-2 switch

The Nintendo switch has been selling tremendously well, selling over 1.6 M switches in the first weekend beating out the PS4 (2013) and Xbox one (2014) with over 82% of Switch owners owning Zelda: BOTW.

The switch is a great console that has a lot of potential to be a best-selling console. The switch handles well and is comfortable to play on hand held mode. Playing on tv mode is good, but with just the joy-cons it can be uncomfortable, However, a joy con grip comes with the console which is quite comfortable to play with. My favourite switch game I have (so far) is Mario kart 8 Deluxe because I personally never owned the wii u version it comes with six new characters, a revamped battle mode and the ability to play on the go. Games play with 720p on hand held mode and 1080p on TV mode, but on TV mode there is occasional frame rate drops, so I prefer playing on handheld mode.

The Nintendo switch is a fantastic console and is one of my favourites as of now. I recommend getting it (if you don’t have it already) when Mario odyssey comes out.

14 Replies to “The Nintendo Switch”