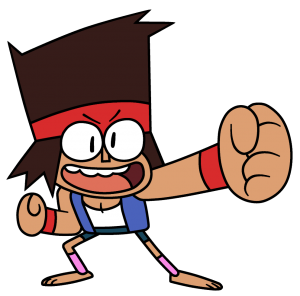 After many failed attempts to make, a ‘Good’ show Cartoon Network has released (in what is my opinion the best show since the amazing world of Gumball) OK KO, a show about a little boy named KO (Clearly someone thought this would be the knock out blow to Teen Titans Go) and his adventures in Lakewood Plaza Turbo, a little town run by Mr Gar (a level 11 hero!). He hangs out with his friends Rad and Enid who also work at Mr Gars Shop and has many adventures that are funny and can sometimes teach us a lesson. Characters include the aforementioned KO, Rad and Enid, his co-workers, Mr Gar, their boss, Carol, KO’s mom, Dendy, KO’s genius friend and Lord Box man the villain.  The episodes are funny and they usually have meaning, the animation is great and many people are praising OK KO for being one of the greatest shows on Cartoon Network. To find out more got to http://www.cartoonnetwork.com.