Hello, my name is Michael and today, I will be talking about.. MINECRAFT.

Minecraft is a fun, enjoyable, and all around brilliant game.  It was released in 2011 by multi-billion dollar company Mojang, who later sold it to tech giants Microsoft for USD $2.5 billion in 2014.

Survival is the original game mode and by far the best. You start off with nothing in your inventory and work your way through the Nether, and eventually go to the End (which is a Realm) to beat the Ender Dragon. Along the way you can build houses, gain food and ores, construct the best armor and raid villages.  There are so many things to do in the amazing world of survival there is no way I can fit it all in here. 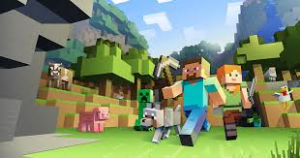 Mobs spawn randomly and try to kill you if you’re in survival. Most mobs are hostile, including:

And many more. You can get experience from killing theses mobs which you can use to enchant your amour and weapons

There are lots of different ways to die in Minecraft. From being killed by mobs, to falling off cliffs, swimming in lava, literally anything. After you die, you can respawn or quit. If you respawn, you can go back to where you died to collect your stuff. If your too late, your things will disappear.

Skins are a vital part of Minecraft. You can buy a variety of packs full of skins for money. Lots of players have many different skins. It’s very rare that you will find two players with the same skin.

The main default skin is Steve.

And that should end my blog . I really hope you learnt something new about Minecraft. Bye!

6 Replies to “Minecraft By Michael”