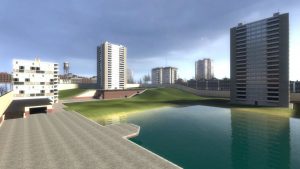 This month will be the 13th anniversary of Garry’s Mod. It inspired many talents, such as the late kitty0706, and has been a haven for servers and role-players. How does it hold up after 13 years? Let’s find out.

I boot up Gmod and the start screen glitches a bit. This is because I am watching some videos on my phone while playing, which causes some interference. Anyway, there are still lots of servers. From the classic Sandbox, to other game modes such as Prop Hunt. But I want to play on my own, so I load one of the most iconic maps in the game, gm_construct. By now, I should mention that there is still an active art community for the game. Heck, we’ve recently had the opening of the TF2 Gmodders group on Steam. I then decide to spawn in some dupes. The dupes page constantly has new innovations from the community, and then the people who innovate get rewarded by the community. For instance, the Rainbow Wall, which when you hit a block, it flies off with a trail in the colour of that block. Try shooting it with an RPG. I then decide to spawn in some mods. The modding community is still flourishing with innovation. I then decide to go on one of the servers. Maybe a Sandbox server will do. It takes a bit to load, but it is most likely because of my PC. The servers are quite welcoming and one of the admins shows me around the server. The community for Gmod can be one of the friendliest communities I’ve seen ever. So, after thirteen years of an amazing game and an amazing community, I’d say that the game holds up quite well.